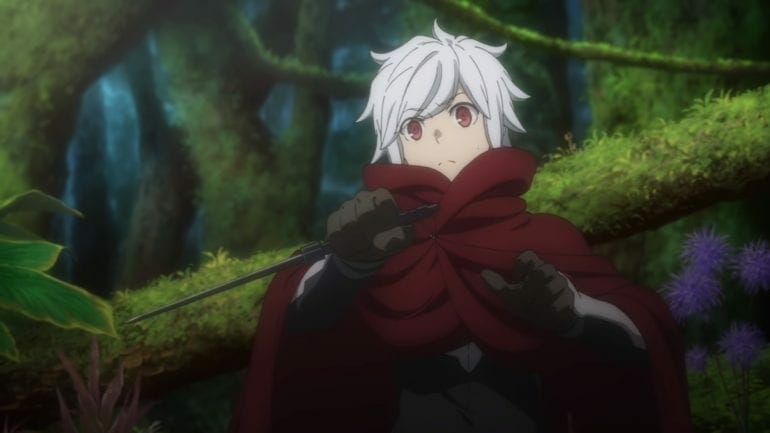 Dungeon ni Deai wo Motomeru no wa Machigatteiru Darou ka or Is It Wrong to Try to Pick Up Girls in a Dungeon? or Danmachi for short is a light novel series written by Fujino Omori and illustrated by Suzuhito Yasuda. The novel series inspired two anime seasons with the third on the way. The initial date for Danmachi season 3 was planned for July 2020 premiere and was delayed to October 2020. A new key visual for Danmachi season 3 anime has been released which you can check right down below.

Many shows who were initially planned for June/July premiere has been delayed to either October or early 2021. The show is produced by J.C. Staff with most probably Hideki Tachibana return as the director. The new key visual features Hestia, Bell Cranel, Aiz Wallenstein, Hermes, and a new pale-skinned girl.

It’s kind of peculiar to have the minotaur in the background with the hooded person. We will have to wait for the plot and more details. The details are revealed before a few days or weeks of the anime release. Check out the trailer for season 3 down below.

The story is set in the huge Labyrinth city of Orario which houses all of the mazes underground known as ‘Dungeons.’ It is a place that causes excitement and is full of new adventures where anyone can gain honor, start a new adventure, or maybe start a romance with a girl.

Bell Cranel is an ambitious young man who wants to be an adventurer and aim to become one of the best in Orario. On his fateful meeting with a little god. This meeting is the start of a new adventure full of hardships and living with the lonely Goddess. Bell aims to become the best adventurer as well as to become the strongest Familia.

Which show are you looking most forward to in October? Let us know down in the comments below. For more information visit the official Danmachi website.