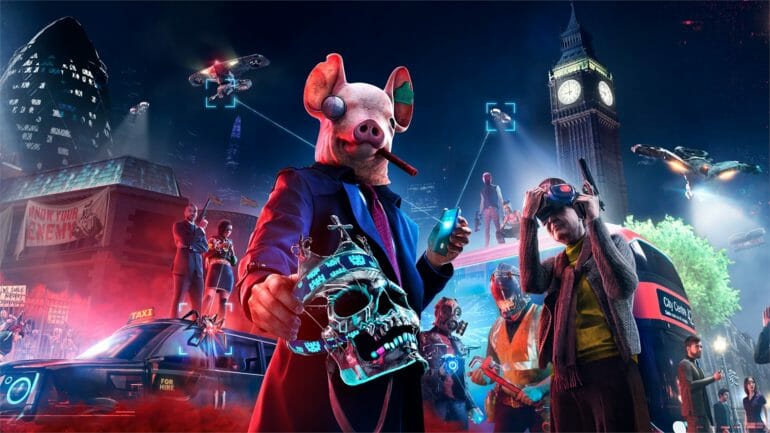 A bland and monotonous narrative with potential for a compelling multiplayer experience.

DISCLOSURE: Game-key for the review was provided by the publisher!

While Watch Dogs: Legion is based in an exceptionally well-crafted and accurate representation of London, the narrative and voice-acting of the game could’ve been presented better and have room for improvement. The option to play as anyone is a unique and enticing attribute, however, not a smart move for a narrative-based game.

Watch Dogs has always had an enticing narrative! The original game featured a hacker vigilante, Aiden Pearce, seeking revenge for his niece all-the-while protecting his family from the jeopardies that came with him being a wanted criminal. Then came the sequel, bringing humour and satire to the dull and melancholic narrative. Hence, I anticipated much from Watch Dogs: Legion when Ubisoft announced it during the Ubisoft Forward event. However, I soon had to lower my expectations when I actually played the game!

Watch Dogs: Legion is based in an extremely aesthetic and charming environment. Ubisoft went above and beyond to render an authentic and true-to-life depiction of London; it’s dull streets and sophisticated infrastructure really encompasses the atmosphere of both Chicago and San Francisco. However, this stunning and artistic open-world felt hollow with the bland narrative and clumsy voice-acting. While the open-world setting of the game had me exploring it for hours, the narrative bored me with its ominous dialogue and dull premise.

For me, the narrative and premise is the most important part of any game! I was fascinated by the hacker/vigilante-vengeance premise of the original Watch Dogs. As such, I was less enticed by the premise of Watch Dogs 2, which focused on liberation and anonymity — a dubious and unfocused narrative. Hence, my anticipations from Ubisoft were a lot, particularly when I came to know that Aiden Pearce (the protagonist in the first installment) would be making a re-appearance in Watch Dogs: Legion. Yet, when I played the game, it felt to me as if Ubisoft decided to dismiss the narrative completely.

Watch Dogs is one of my favourite games and Watch Dogs: Legion fails to live up to the precedent set by its predecessors. However, that isn’t to say that the narrative was entirely bland. There were some instances where the narrative really escalated. For instance, the Mission Impossible-inspired introduction was rather impressive and certainly unpredictable. As the game advanced, the narrative slowly changed from being “preventing the entire city from exploding” to “doing things for others so you can recruit to do more things for others”.

Considering how auspicious the premise of Watch Dogs: Legion actually is, Ubisoft has completely disregarded the potential. Rather than being a futuristic redaction of George Orwell’s best-seller, 1984, the narrative’s more of an apathetic and confusing political satire. Watch Dogs: Legion narrates the experience of the characters under a totalitarian administration called Albion; armed soldiers roam around the streets, arresting whoever they desire; surveillance drones monitoring you at all times, and citizens protesting for liberty. Still, I noticed more of this premise on the streets, as I wandered across them than in the actual campaign.

Voice-acting and dialogue play a noteworthy part in any form of entertainment; be it a movie or a game. However, the voice-acting in Watch Dogs: Legion is as awkward as can be and the dialogue is, well, ridiculous, to say the least. Instead of being a dark and morose experience, the dialogue is comical and uncomfortable. This is particularly true whenever you recruit someone to DeadSec. While Ubisoft has provided every NPC (or APC, as Ubisoft calls them) with a back-story, not all of them present the emotional and dismal narrative that the game demands. They all seem to hate Albion and revere DeadSec, but no one knows why!

While the representation of London is as accurate and realistic as possible, the same can’t be said about the APCs. During my ventures across the open-world cityscape, I came across a few stereotypical accents that just made me feel uninterested. The poor voice-acting and facial animations only add to the awkwardness! While the original Watch Dogs’ voice-acting wasn’t remarkable, Watch Dogs: Legion is no improvement. However, this does not mean that all the characters have bad voice-actors; there are some that are, well, decent.

If you’ve played any of the Watch Dogs games, you’ll know that stealth is a predominant attribute of the game. The original Watch Dogs was criticized for focusing more on physical combat than stealth, or hacking. With the sequel, Watch Dogs 2, Ubisoft made it impossible to win without stealth. In Watch Dogs: Legion, it seems that Ubisoft has chosen a balanced way. You can complete a mission by either making noise and rampaging your way across objectives, or you can do it silently and sneak past the adversaries. If you choose to shoot, you will instantly be met with opposition from nearby opponents and even incoming ones. However, the impact your bullets will have on the opponents is much less than theirs. As a result, you’re, in a way, forced to depend on stealth.

If your character is arrested or injured, they’ll be placed in a timeout, which can last up to 30 minutes. If you have perma-death enabled and your character dies, you’ll lose them forever. This can become vexatious at times, however! Since the characters have certain abilities and even weapons, having them be placed in timeout or losing them forever can be destructive when some missions call for particular Operatives.

If there’s one thing to praise Watch Dogs: Legion for is it’s well-crafted and immersive open-world experience. From Watch Dogs to Assassin’s Creed, Ubisoft has mastered the skill of rendering realistic worlds that are as accurate to their counter-parts as possible. Watch Dogs: Legion is no exception! I’ve never been to London but roaming around the city felt as if I was actually there. Driving across London at night, staring at Big Ben and the London Eye had its own mesmerising experience that not many games can surpass. It was an equally surrealistic experience sauntering around the dreary streets and painted alleys. Hijacking a ctOS drone and touring over the city, or calling in a cargo-drone and hovering over the tall, dull infrastructure was a unique adventure for me.

Ubisoft went above and beyond to make Watch Dogs: Legion feel as accurate to London as can be, and it shows. For instance, all the cars drive on the left side of the road, just as it is in the United Kingdom. In the city-side, the NPCs communicate in a sophisticated manner, while the alleyways are cluttered with furious protestors that will attack you if you stare at them for a while. The city is always swarmed with hostile Albion soldiers that arrest anyone they want to, and you notice this interaction everywhere across London. The option to rescue civilians arrested by the armed soldiers is a satisfactory feature and it really took me back to the days of being a badass vigilante in the original Watch Dogs. If there’s a saving grace for Watch Dogs: Legion, is its open-world experience!

While Watch Dogs: Legion falls behind for being a contender for Game of the Year (GOTY), there is still a chance it becoming one of the finest online multiplayer games of the decade. We’re not certain what Ubisoft has planned for the game’s co-operative experience, releasing in December of this year. However, there’s an immense potential for the game’s multiplayer experience. From my few hours of play-time, I found the narrative bland and dull, and the open-world experience is the game’s only saving grace. Appreciation where deserved; Ubisoft has formulated an extraordinary open-world experience. However, other aspects of Watch Dogs: Legion could’ve been improved, considering the immense hype that surrounded the game!