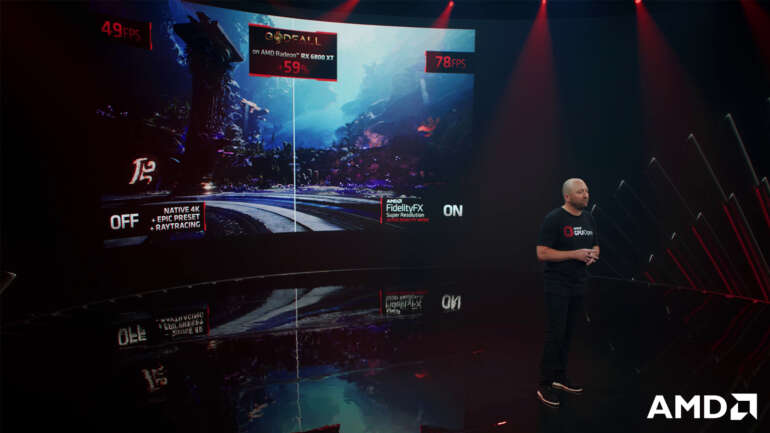 Since the AMD RX 6000-series GPU release, consumers have been anxious about where AMD stands in terms of their own DLSS alternative. NVIDIA’s DLSS feature is one of the most prominent features of the RTX 2000-series and RTX 3000-series GPUs. It is one of the few features that still gives NVIDIA an edge over AMD… that is, until now! In a surprise announcement, AMD announced its new NVIDIA DLSS competitor, AMD FidelityFX Super Resolution (FSR), and it seems more than just promising.

AMD has finally released a demo of its much-anticipated DLSS alternative for RDNA 2.0 GPUs. Their new technology was unveiled within Godfall, a first-party AMD-optimised title for their RX 6000-series GPUs. Does it stand up to NVIDIA’s AI-based super-sampling technology, however? It seems so!

Contents hide
1 What Is AMD FidelityFX Super Resolution (FSR)?
2 Is It Any Good?
3 When Will It Be Released?

Before AMD released its RDNA 2.0 GPUs, the company announced that a DLSS alternative for AMD GPUs is also in the works. After months of wait, it’s finally here! FidelityFX Super Resolution, or FSR, is AMD’s AI-based super-sampling technology to compete with NVIDIA’s DLSS technology. While this doesn’t seem like much of a big deal, what sets AMD’s FidelityFX Super Resolution (FSR) feature apart from NVIDIA’s DLSS feature is that it is not only compatible with all AMD RX 6000-series GPUs but also AMD RX-5000, RX 500-series and RX Vega-series GPUs… and all NVIDIA GTX 10-series GPUs and above. Yes, you heard that correctly!

This is a huge milestone for the GPU and PC gaming community, as AMD hasn’t reserved their innovation for AMD GPUs only. AMD FidelityFX Super Resolution (FSR) is already supported by more than 10 game studios and engines, and the company is already expanding that number even more. Additionally, the new feature is also supported by all AMD Ryzen-series APUs with integrated Radeon graphics. It’s really impressive that, unlike NVIDIA, AMD hasn’t made its DLSS alternative exclusive to AMD GPUs only.

Is It Any Good?

Like NVIDIA DLSS, there are 4 presets that you can choose from, based on your preference. This means that you can either prioritize image quality or performance, or a bit of both. Either way, you’ll receive a significant boost in frame rates. Additionally, AMD promises up to 2.5x the performance boost at 4K with the “Performance” preset.

As for the NVIDIA GTX 1060, AMD’s demonstration showed a boost of 41% at 1440p resolution on the Epic graphics preset. That is a HUGE improvement for the infamous NVIDIA GTX 1060, particularly at 1440p!

When Will It Be Released?

We can expect the AMD FidelityFX Super Resolution (FSR) to release on 22nd June, as per AMD. If you’d like to see your favourite game be supported by this new feature, you can send your feedback to AMD here. AMD has been working tirelessly with developers to release their innovation for everyone and we hope to see more from them soon. AMD has also stated that it would require much less effort on the developers’ end to implement AMD FidelityFX Super Resolution (FSR) compared to NVIDIA DLSS. Hence, we can anticipate a vast assortment of compatible titles in the near future!

What do you think? Comment below and tell us your opinions!