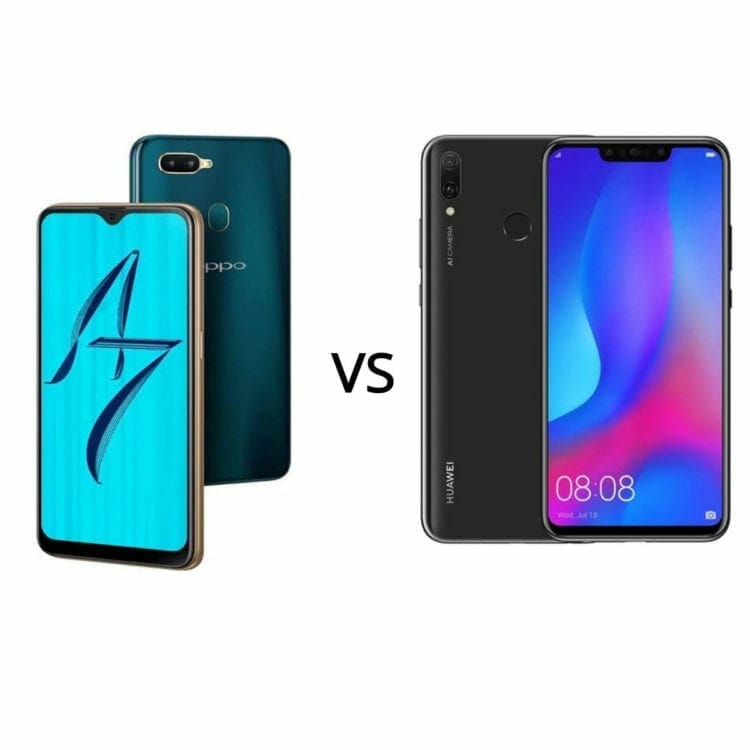 The competition between smartphone companies has significantly ramped up in recent years. Especially with Huawei and Oppo, the biggest budget-friendly phone makers in the market, competition has become substantial that it is really a pain to choose the best phone which covers all the basic needs and being available at a reasonable price. If there is a rivalry famous between smartphone companies it’s either Samsung vs Apple or Huawei vs Oppo. We cannot say that Huawei is better than Oppo or vice versa. Sometimes Huawei takes the ground and sometimes it’s Oppo. Although Huawei has been in the Tech market for quite some time compared to Oppo. But that doesn’t mean Huawei is a lot better.

The quality from Oppo is top notch and it keeps getting better. Every year both companies release the best possible smartphone which delivers superb performance paired with a pocket-friendly price. This year, Huawei released Y9 2019 while Oppo released the A7 to attract the smartphone users who are looking for a budget phone or a phone with premium features while watching their pocket.

If you are looking to upgrade to a new phone while going easy on your wallet this article might help you choose between one as the Oppo A7 and Huawei Y9 are probably one of the best budget smartphones which you can get in 2018. Let’s get into the comparison without further ado.

Selecting the best phone from Oppo A7 and Huawei Y9 is going to be a very tough job. Both of the phones have great similarity and it proves challenging to select which phone is better overall. To help solve this, let’s divide the post into different features and in the end, you can determine which one is better in its respective dimension.

Both phones have a front glass panel and the rear is made of plastic. I think it all depends on personal tastes. Some people might like the A7 some might favor the Y9. Opinions aside, Huawei did a pretty amazing job with Y9. No doubt the A7 design is pretty but Y9 offers a distinguished look. Most other phones are similar in design as well. The A7 is a big phone but Y9 is bigger and shows it. The side buttons on the A7 are on both sides of the phone, the volume keys are on the left side of the phone and the lock button is on the right. I didn’t like this at all, I find Y9 better in this regard where all phones are on the right side of the phone.

Which one is more comfortable to hold?

It is kind of hard to hold the Y9 as compared to A7 because Y9 is bigger than A7 and Oppo’s A7 really wins over Y9 in this category. Both phones almost have the same thickness but still, you will be more comfortable with your A7 than Y9.

Oppo A7, on the other hand, isn’t that impressive

Let’s talk about the rear of the phones, Both phones have a fingerprint sensor at the back and dual cameras to the top left. The A7 cameras are vertically aligned while Y9 cameras are horizontally aligned. The fingerprint sensor works really smooth and is quite responsive on both phones. They both offer almost the same response time but after trying for quite a while, the A7’s sensor seems slightly faster. The difference isn’t visible unless you compare them in a slow-motion video and count the frames.

6″ phones are quite huge and notches make them feel even bigger. The A7 is quite a big phone but it cannot be compared with Huawei’s Y9. Huawei did a superb job with design and performance, especially with attention to the display. It is huge but also it is very bright and colorful, it helps bring the phone to life. The A7 display is also not too bad for wear as the phone comes with the industry’s first waterdrop screen design while Y9 has the LCD IPS display. In bright sunlight or in the blanket at night, Huawei seems to have the better display. The full screen to body ratio is less than in Huawei Y9.

You can decide the rest after checking out the display specifications of both phones.

The specifications of both phones are self-explanatory. Huawei is the clear winner here hands down. Due to the 19:9 ratio in A7 the games and pictures seems stretched and honestly do not feel that great. The pixel per inch density of A7 is way too low considering it was just recently released.

One thing these both phones have and other premium phones like from Samsung or Apple, do not have is the huge battery life. These phones just destroy every other phone in the same or high budget. Y9 battery was huge and is the biggest battery I’ve seen in any phones I’ve ever used and when I got my hands on the A7 I assumed it would be around 3000mAh and to my surprise it bigger than that, even bigger than Y9. The A7 has a huge battery of 4230mAh that really lasts you a day or two after rough usage. Most of the features offered by Oppo’s A7 are mediocre to okay but this feature is all where everything makes sense.

Huawei features Mali-G51 MP4 GPU in their device and A7 comes up with Adreno 506. After testing, the Y9 performed way better than A7 did. It seems like Huawei is getting unbeatable after every aspect.

Comparing both of the GPUs on NotebookCheck everytime Mali performed 30-40% better than the Adreno.

Y9 HOLDS ITS GROUND IN GAMING!

Besides having a weaker GPU than the Y9, both phones perform exceptionally well. Check out the gaming screens from different cellphones down below

And they were pretty smooth. There wasn’t any significant lag or crashes either.

Gaming on Oppo A7:

I didn’t had much time to test that many games on A7 but since it ran PUBG smoothly I think it will run other graphic intensive games as well.

Gaming on Oppo A7

The A7 did a pretty awesome job to constantly run the games for like an hour or two without breaking a sweat and the Y9 was able to deliver the same. However, thinking about games A7 performs better but when the game covers the whole screen it becomes annoying. The top-notch on A7 really hinders the gameplay which makes the gaming experience quite unpleasant and unappealing. Y9 clearly wins in this regard – no questions asked. Overall the multi-tasking is as good as it was on the Y9.

The battery life on both phones is mind-blowing!

The battery timings on A7 is a lot better than on Y9 due to better battery management and smaller screen as well. A7 surely last longer than Y9, with rough usage the phone can last up to 14-15 hours easily and with normal usage it can even last for 2 days even. Y9 offers a batter of 4000mAh and A7 comes up with 4230mAh.

Talking about the software of the phones, both phones run on the Android 8.1 (Oreo) and the GUI and software of both of these phones is terrible.

The Oppo A7 features the company’s own Android OS variant which is called “ColorOS”. After a few days of usage, the OS felt very cumbersome. The big fonts perhaps take away the aesthetics and not being able to change the font was a significant dealbreaker.

The UI of A7 is just like your average smartphone’s UI. It is not great, eye-catching or aesthetically pleasing. Maybe Oppo didn’t design this phone for UI but perhaps for other features which I have yet to found beside its huge battery.

On the other hand, Y9’s UI isn’t special either but I’d have to say it is better than A7 as you can tweak the font type, size and you can have eye comfort as well which makes the colors on the screen warmer. I love this feature.

Fast Charging is not Supported!

As mentioned earlier both phones have huge batteries and they do not support or have any form of fast-charging, despite this, both the phones charge relatively quickly. The Huawei Y9 charge time is in between 70-90 minutes which is impressive, the A7, on the other hand, takes around 120-130 minutes to fully charge which is slow. It would have boosted the values of the phones to deliver fast-charging in either phone.

These phones do not have the good software as it feels really plain and dull unless you install external launchers and icon packs from the Play Store. If you are downgrading from an expensive phone by flagship brands there is a higher chance you will dislike the software of both phones.

For a smartphone released in 2018 to come with a bad camera is something a lot of people will not like. Predominantly speaking there are two types of people when it comes to smartphones; People who are photoholics and want a great front and rear cameras for their daily life photography and selfies. Other people are looking for premium specifications while compromising on a camera’s quality.

If you are the person who falls in the former category do not get the A7, the cameras of this phone are straight up bad. The cameras are perhaps worse than the Y9 in our review of the Y9 but after checking the A7 cameras, the Y9’s cameras proved to be superior. They are not the best you can get but they are vastly better than the A7’s.

Pictures taken from Oppo A7

Here’s Why Y9 Takes The Crown and The Throne

Check out the specifications of both phones and decide for yourself.

The selfie camera does have more pixels but, somehow the Y9 beats A7 probably because of 2 dual selfie cameras. Get the Huawei’s Y9 as this is the best budget phone available in the market with premium design and features.

The speakers of both phones are well built producing almost the same sound quality. Huawei Y9 already impressed me with their great speakers and to my surprise, the speakers of A7 are on par with Y9 you will not be able to tell the difference as they sound so much similar. Whichever phone you decide to purchase, you won’t need to worry about missing your morning alarms that’s for sure.

Both of the phones have a notch with Huawei Y9 having a bigger notch on top than the A7 and surprisingly the top notch in A7 doesn’t interrupt the notification panel which was missing in the Y9. The notch shelters the selfie camera and earpiece in both phones and they are quite better than most phones available in the market. Oppo did an excellent job with the notch and one of the few features of A7 which makes the phone really shine against the Y9.

However, the body-to-screen ratio is still lower in A7 than Y9 which is not that noticeable but considering Y9 is 6.5″ you will really notice the difference when you compare the phones side by side. Other than that everything is good and feels like in the perfect position.

Price wise both phones are almost the same but you might find the A7 some few bucks expensive than the Y9. Besides the huge battery life and the top-notch, Y9 clearly beats A7 in every other aspect you can think of: be it performance, cameras quality, hardware, software. There isn’t a single reason which might confuse you in the selection of your desired device. Y9 is your best budget phone of 2018 which has almost every feature you can find in a flagship phone while remaining pocket-friendly.

Let us know what do you think about Oppo A7 vs Huawei Y9 2019 comparison down in the comments.