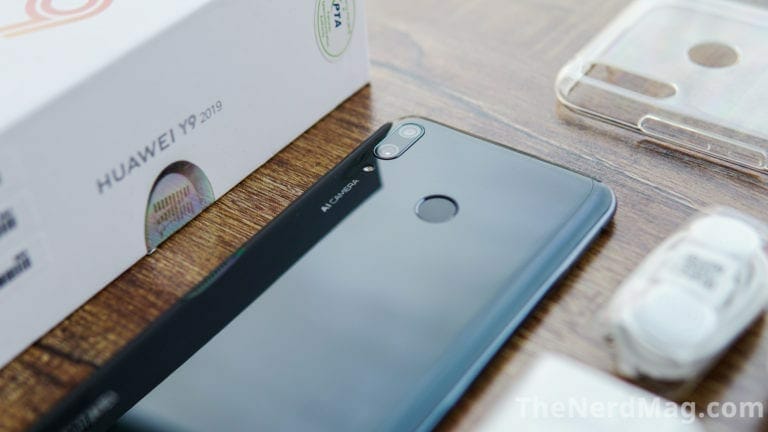 Gone are the days when a mobile phone was merely a communication device that you carried in your pocket. The technological breakthroughs of the past decade have changed the way we look at our phones. As technology progresses and costs subside, an arena for the competition opens up where all the major contenders bout for first place.

The current smartphone market is just that, a highly competitive stage that churns out the weak and favors the strong. In this dynamic domain, manufacturers must adapt and innovate according to the needs of the consumer. The past couple of years have introduced a new class of smartphones that are marketed as budget phones that don’t shy away from providing nearly the same level of features as the top tier ones. One such smartphone that was recently released by the Chinese smartphone manufacturer Huawei is the Y9 2019.

The Huawei Y9 is an ambitious piece of technology that takes on the competition with a wealth of features that are expected of smartphones costing significantly more. If you are looking for a smartphone that will fulfill your daily needs, that offers speed and reliability, and most of all, that does not cost you your monthly house rent then Huawei Y9 just might be the phone for you, and here is why.

The Design of Y9

Finding a smartphone that is aesthetically pleasing, performs well and at the same time does not cost an arm and a leg can be difficult. I would call it the Holy Grail of smartphones and although such a smartphone may as well be a work of fiction, every now and then a smartphone comes along that gets very close to the aforementioned criteria.

The Huawei Y9 comes with a Front Glass, a Multi-layer plastic back, and a polycarbonate frame design which makes it look attractive. I am not exaggerating when I say this – the phone does look alluring to the eye. Needless to say, one of the best things about this phone is its looks.

The back of the phone as mentioned earlier is made out of a multi-layer plastic but don’t let that fool you, because the plastic back gives out a glassy texture which adds to the premium look of the phone. 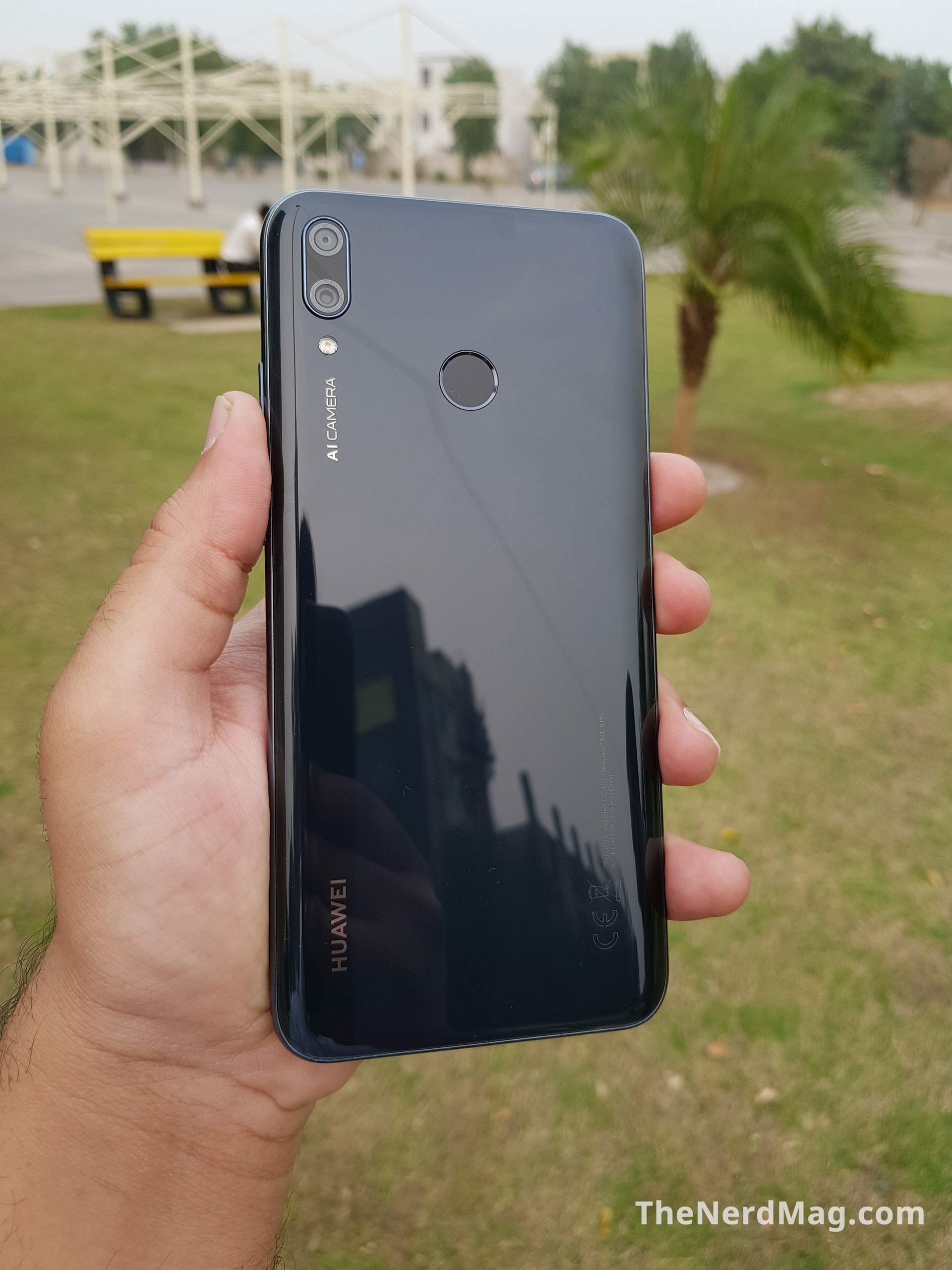 Despite the phone having a massive 6.5″ FullView Display, it is surprisingly comfortable to hold. It fits perfectly in your hands but I do recommend using the cover which comes with the phone as it provides more traction so you don’t accidentally drop it. The smooth back surface is prone to slippage so using the cover is probably safer. The reason behind the comfortable grip, in my opinion, is the left side of the phone which is completely empty of any keys. All the physical buttons are on the right side of the phone such as the volume rocker and the power button. 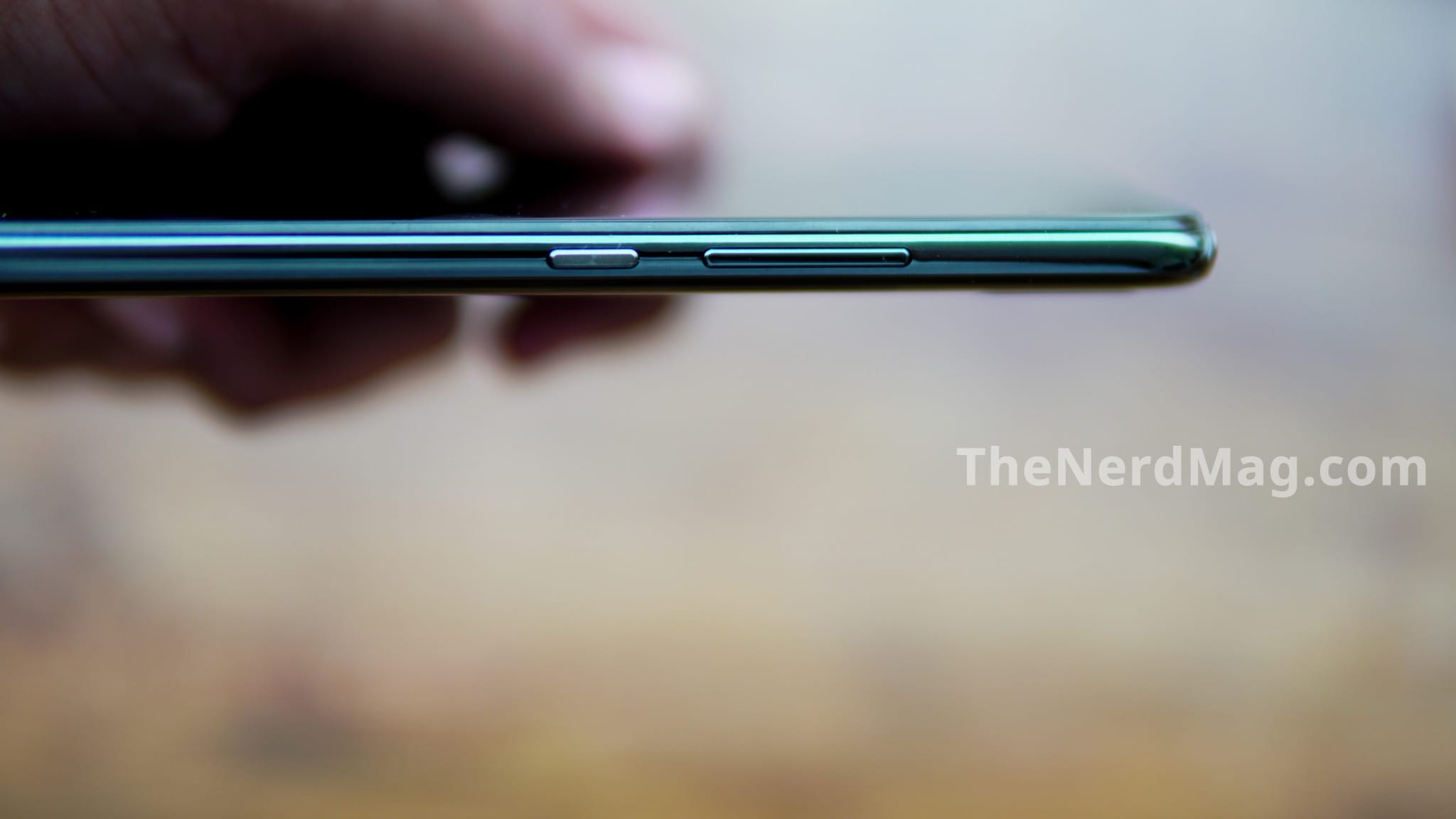 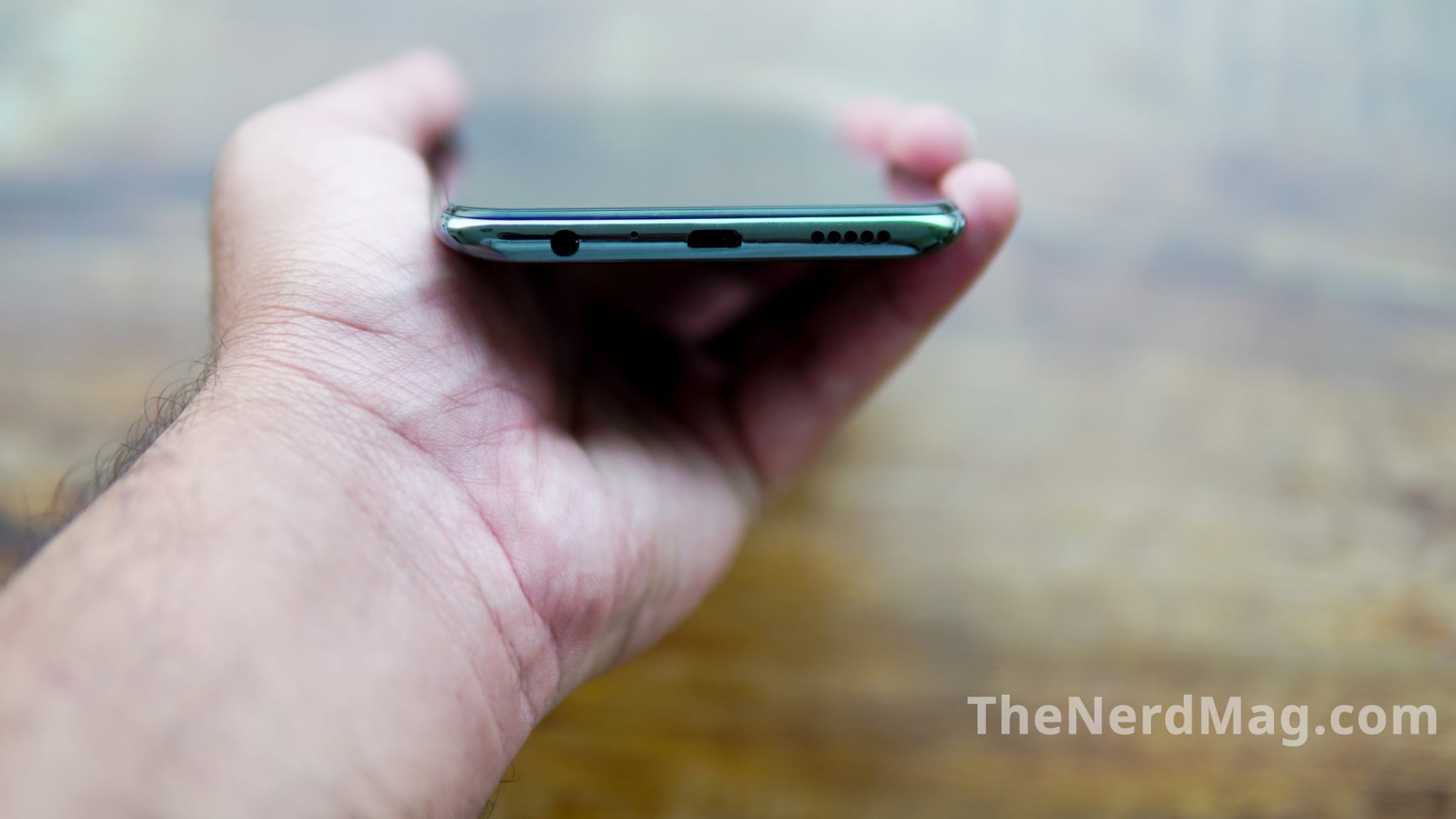 Overall the design of this phone is unlike any other smartphone in this price range. It is comfortable to hold despite being slippery but as I said before, the provided back cover easily remedies this. The buttons are in the perfect location. Everything related to the design of the phone seems well thought out.

In terms of weight, the phone is not that heavy at all. You will not get tired of holding it even for an extended period of time which is what I did when I was using it for a week.

The fingerprint sensor in the back is pretty fast and responsive. There’s hardly any delay when you lock the screen and unlock it via fingerprint. The delay is so short it doesn’t even feel the difference. This is also one of the plus points about this phone. 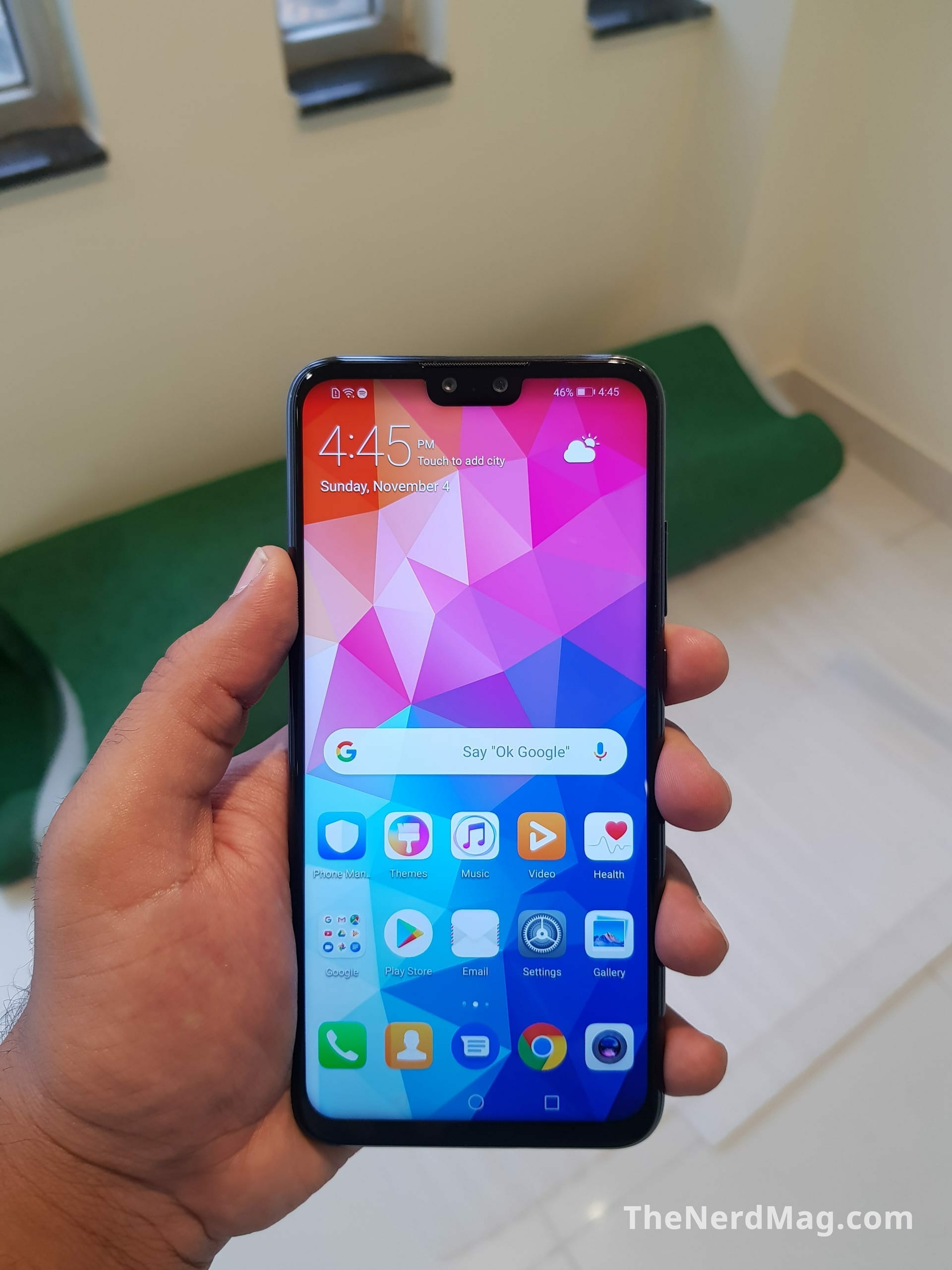 Talking about the display, let us start with the main attributes. Huawei Y9 2019 rocks a huge 6.5” LCD IPS display. Let me inform you that I am personally an AMOLED display fan and I’ve been using phones with AMOLED displays for quite some time. Y9 does not have an AMOLED display sadly but instead an LCD panel which can either be a hit or a miss depending on personal tastes. Both display technologies have pros and cons. Although I naturally tilt towards AMOLED as I have grown accustomed to it, the LCD display on the Y9 isn’t bad at all. Instead, it is surprisingly good. The color reproduction seems accurate. The images and icons seem crisp. At almost 400 pixels per inch, the Y9’s display isn’t exactly lacking in pixels so you can easily expect a nice sharp image.

The phone not only has its premium looks but the performance to match. What really makes this phone stand out besides its gorgeous looks, is its spectacular performance in this price range. The phone performs exceptionally well even at demanding tasks. I’ve tried many resource-hungry applications such as graphically intensive games and with the exception of a few hiccups here and there, the phone didn’t break a sweat and ran the apps smoothly.

The games I’ve tried on the Y9:

I didn’t experience any crashes, lag, bugs or anything else that might hinder usage.

Multitasking on the phone is a breeze. Under my use, the phone was used aggressively as far as multitasking goes. When I was using the phone there were at least 5-6 apps running in the background.

Even switching back to them presented no problems. Since I’ve been praising the mobile performance it is worth mentioning that the battery also keeps up with it. In my experience, when we are dealing with budget smartphones, most smartphone batteries fail to last till the end of the day and before you know it you are looking for your charging brick.

This is where the Y9 battery really shines. The 4,000 mAh battery allows you to work to the fullest without worrying about the battery consumption the whole time. At the end of the day, you will still have a considerable amount of charge left. Considering the sleek design of the phone I must say I am very impressed with the size of the battery and the performance it powers. If the prolonged battery charge is your concern, you cannot go wrong with Huawei Y9. Moreover, the phone also has smart power consumption optimization, providing 9 hours of video playback or gaming, 65 hours of music playback and 14 hours of web browsing under a 4G network on a full charge.

The device runs on EMUI 8.3 with Android 8.1 and for such an outstanding phone the UI feels outdated and I’m honestly not impressed with EMUI. I think this is one of the things which feels off about the Y9. Why? It feels way too plain for a phone with such lavish design. The settings and the notification bar feels mundane and there is room for improvement.

According to the official Huawei website, compared to the Y9 (2018) Kirin processor (Kirin 659), the Kirin 710 used in the Y9 (2019) octa-core chip improves single-core performance by 75% and multi-core performance by 68%. The main reason behind this huge boost is due to the 12nm technology which allows the chipset to consume 30% less power.

You can rediscover gaming with GPU Turbo. It has 2x the GPU efficiency and a GPU performance increase of 1.3x to deliver a powerfully immersive gaming experience. No wonder the games felt smooth and yes you don’t have to explicitly activate GPU boost the device automatically does that for you when you launch a game.

The phone lacks any sort of fast charge technology so I am afraid a full charge will take some time. According to my test, the phone took anywhere between 70-90 mins to reach a 100 percent charge. This is still impressive when you consider the plentiful 4000 mAh battery.

Overall Performance Score: 8/10. The reason I gave it an 8 is because I’ve noticed sometimes the device has problems and might freeze for a brief second. However, this has been rather scarce and has mainly to do with EMUI rather than the hardware of the phone.

Broadly speaking, There are two types of people when it comes to smartphone cameras; one looking for the best camera for daily photography and selfies and the other looking for good performance who can compromise on the camera. If you fall in the former category then, unfortunately, this may not be the right phone for you. Despite having a dual camera setup on the front and back, the picture quality of the cameras is nothing to write home about especially the rear cameras.

Concerning the front camera, I’d say it performs well, in my testing the selfies I took with it were great but the same cannot be said about the rear camera. The phone features dual-cameras on the back with the primary sensor being a 16 MP and the depth sensor being a 2 MP. Interestingly the cameras feature AI tech, meaning the camera can intelligently recognize scenes and is trained to see more than 500 scene types by creating 22 category labels to provide real-time optimization.

Still, the rear cameras fail to deliver as one would expect from a dual-cam setup powered by AI. However, You can make things a tad bit better in HDR mode which somehow manages to deliver pictures in slightly better quality but still lags behind when compared to other smartphones in the same price range.

The phone features a top-notch that houses the earpiece and both the front camera sensors. Having used smartphones with notched displays for a while now I can understand why a majority of people don’t prefer them. In my experience, I have found the notch to be very annoying especially when I try to drag down the slider from the top of the screen. Many times the sliding motion of my fingers fails to register because of the notch and I have found the same to be true for the Y9. 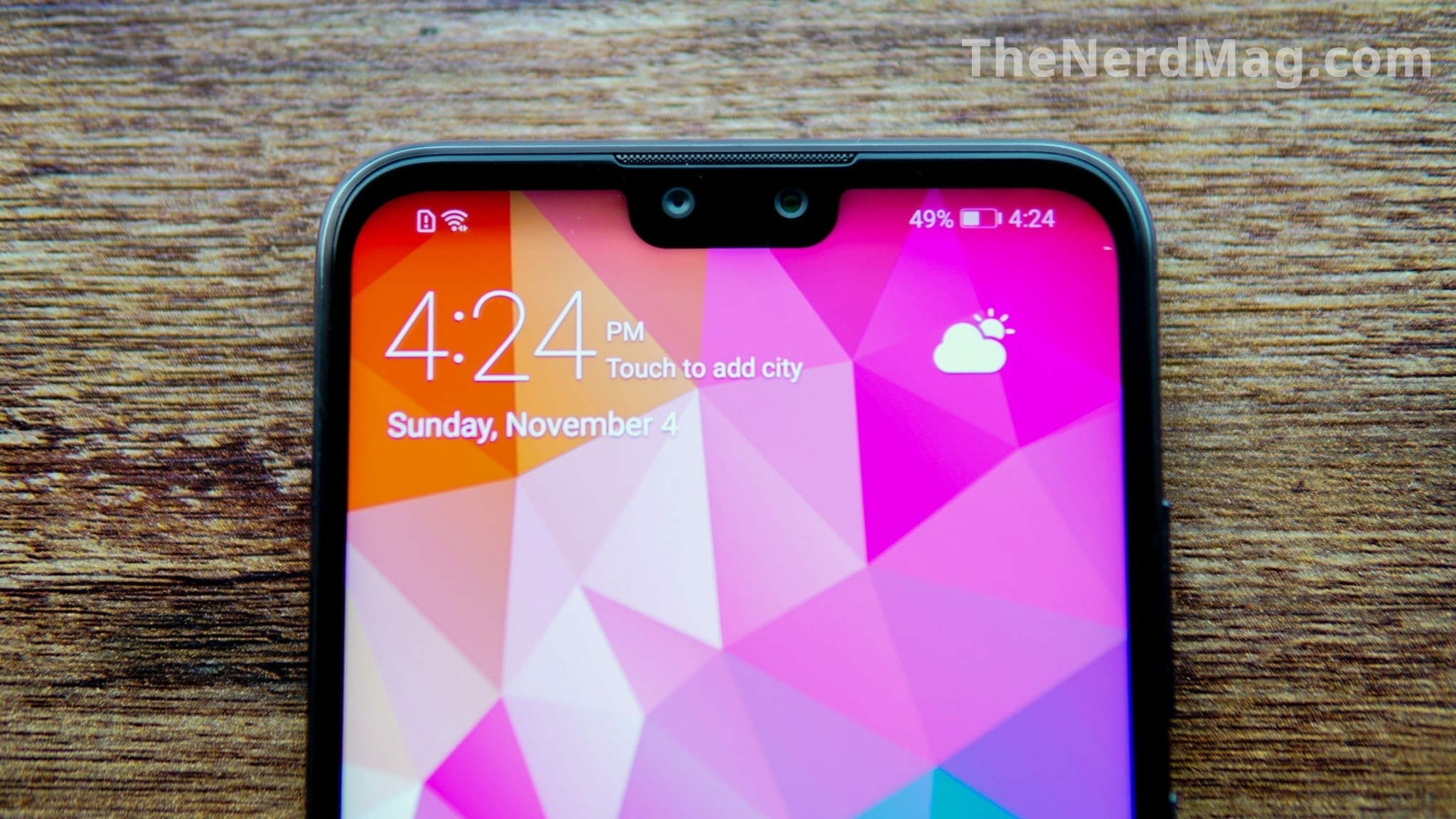 However, there is an option where you can hide the notch which adds black bars to the sides of the notch making the screen look as if its a part of the notch. This will only help with aesthetics, the slider problem will still persist if you keep sliding it down from the middle of the screen. I must add that compared to other smartphones, the notch on the Y9 is bearable in the sense that it doesn’t consume too much of the real estate on the display. The size of the notch is not insanely large such as the one on Pixel 3 or other smartphones.

One of the reasons this phone is one of the best budget releases of 2018 is its speakers. The Huawei Y9 features speakers in the bottom right next to the charging port. I really like the speakers of this phone mainly due to the fact that they get very loud without any noticeable distortion.

Often times, even flagship phones fail to deliver a nice listening experience on the speakers but I was pleasantly surprised with Huawei Y9’s speakers. The music sounded clear and loud. In my experience,  budget phones either have a low volume on the speakers or when they do manage to get loud the sound is often distorted which takes away from the listening experience. Shoutout to Huawei for actually including great speakers in this smartphone. 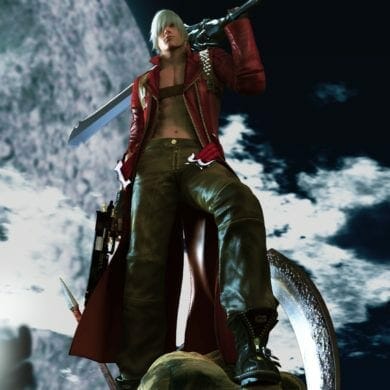