Today, the Samsung Galaxy A8s has been finally released. After making countless rounds on the internet, from leaks to rumors, the phone is finally here and offers some highly impressive specifications. The most prominent feature of this phone is undoubtedly its Infinity-O display which is a brand new technology with the A8s being the first and the only phone in the market currently to feature it.

It has been a long time coming and it appears that Samsung is, at last, taking the Notched Display route for its smartphones. Previously, up till the Samsung Galaxy S9 and Note 9, Samsung stuck to a notchless display with more emphasis on thin bezels and a large display that covered most of the screen.

The arrival of Samsung’s Infinity line of displays has revolutionized Samsung’s smartphone display and it is currently rumored that the Samsung Galaxy S10 will also feature an Infinity-O display or one of the other variants of this new Infinity Line.

Samsung Galaxy A8s brings one of a kind infinity-O display for the first time in the smartphone realm. Why is this display such a big deal? Well, for one, it negates the need for that chunky notch in the middle of the screen that so many other smartphones have. Many would agree that the traditional notch design as seen on the iPhones and the Pixels is less than pleasing to the eye. Google Pixel 3 being the best example here.

Moreover, the infinity notch since it is minuscule as compared to the traditional design frees up a significant portion of the display that can be used for displaying time, date and other information like battery usage etc. In short, this implementation of the notch frees up a lot of real estate on the display. 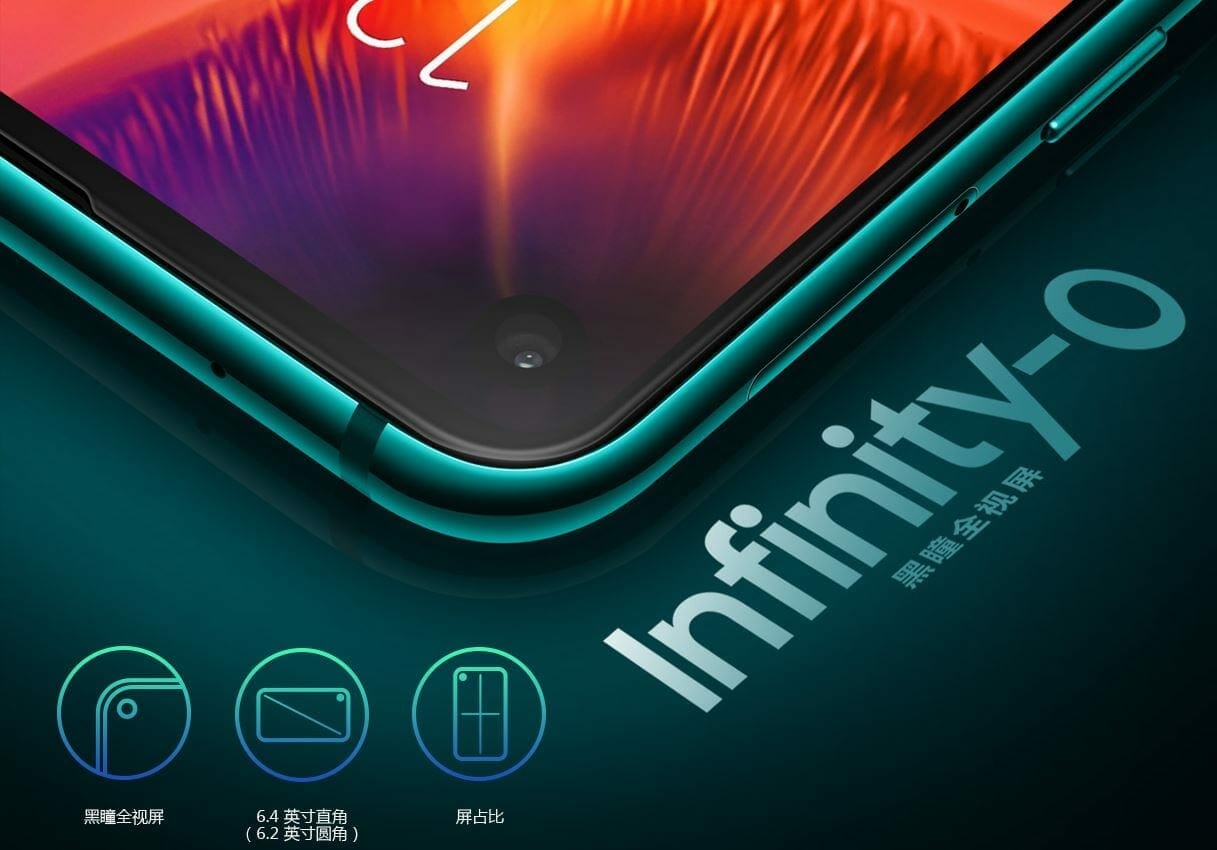 Currently, the Samsung Galaxy A8s might as well be the best screen-to-body ratio smartphone on the market right now. The bezels are virtually non-existent and the chin is next to nothing. The beautiful 6.4-inch display sits comfortably on the front occupying most of the space.

The display is filled with 1080 x 2340 pixel resolution which translates into about 400 PPI. This is more than ample to provide a sharp and crisp image with nice and accurate colors.

Coming to the next big feature of the phone, the A8s has a tri-camera setup on the back. The primary lens is a 24 MP while the telephoto and depth sensors are 10MP and 5MP respectively. As claimed by the Samsung’s Chinese website, the 10MP telephoto camera has auto focus functionality and a 2x optical zoom. 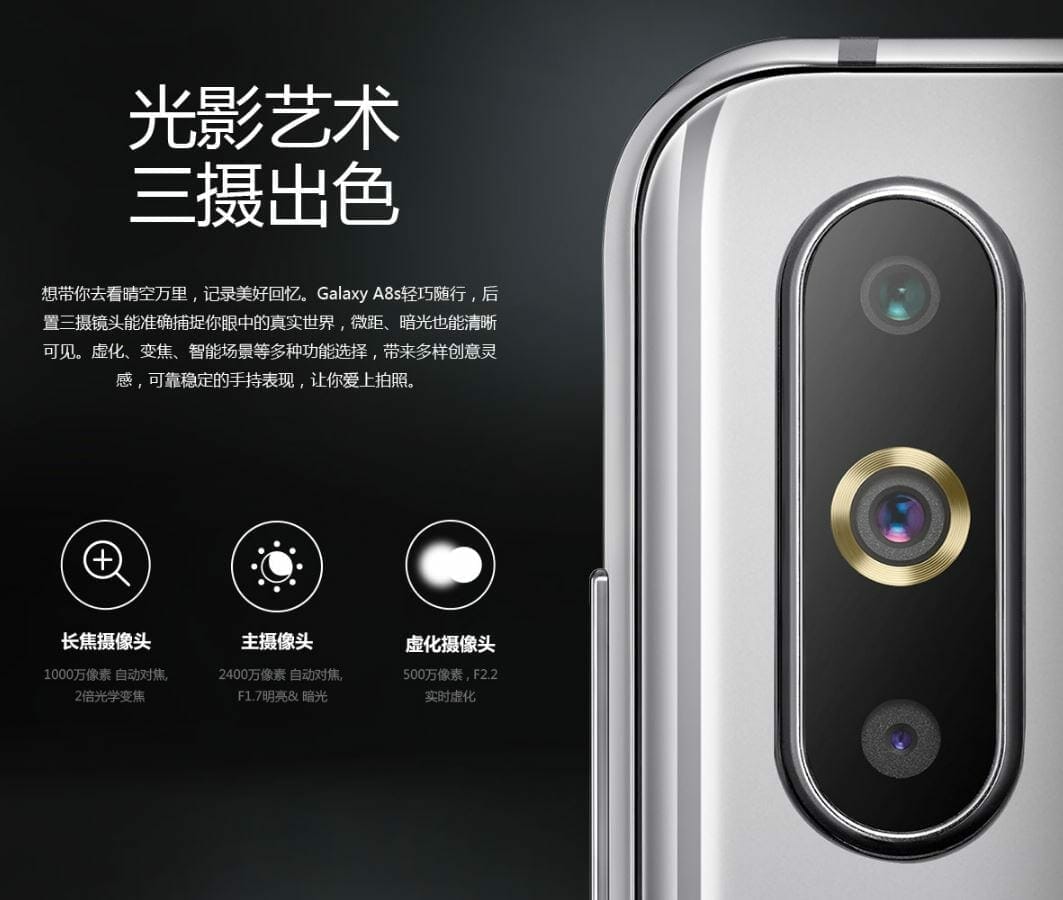 The Primary 24MP camera has an aperture of F1.7 while the 5MP Depth lens has an aperture of F2.2. This means that you will be able to take portrait photos with that popular bokeh effect. The depth lens will provide a nice depth of field blurring all that is in the background.

On paper, the capabilities of the A8s are remarkable however we must wait for unofficial reviews from independent sources to form a final opinion.

As for the internals, the smartphone is powered by a Qualcomm Snapdragon 710 eight-core processor . This particular processor is significantly faster than its predecessor and at the same offers greater power efficiency. The Storage offered on this phone is a choice between 6GB/8GB RAM and 128GB ROM. 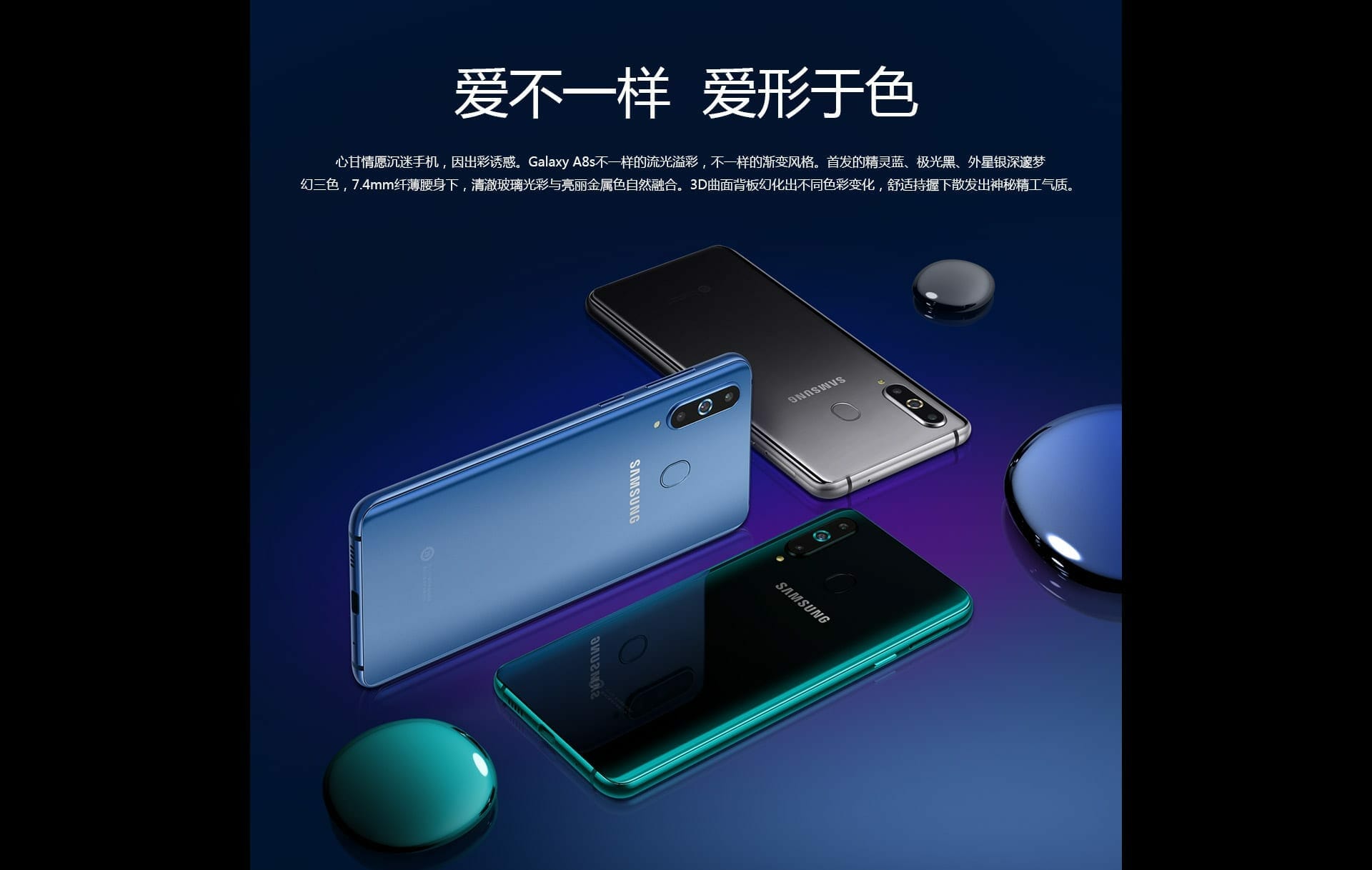 The Smartphone has been released in China today and will be making its way across Europe and the West in the next few days.  We will update you on the Price and Availability details shortly. Let us know in the comments what your first impressions of the phone are.

Dota 2 Patch 7.20e Has Been Dispatched - Bringing Minor Nerfs to Some Items and Hero Abilites and Talents