How to Play Doom Eternal Without Denuvo DRM on PC

Bethesda may have released the best version of Doom Eternal all along. It seems that the company forgot to remove an executable file that allows the game to run without the highly controversial Denuvo DRM. No pirate group needed for this release! If you are wondering How to Play Doom Eternal Without Denuvo, this is the best and most legit way to do so.

UPDATE: Bethesda Launcher exe is confirmed to work with the Steam version!

https://t.co/y09SycqqBz launcher version of Doom Eternal just leaked a DRM free EXE, confirmed to be working with the steam version of the game. Already uploaded on https://t.co/fO9lvAK9TR #crackwatch #denuvo

How to Play Doom Eternal Without Denuvo – Hell has been Razed

Unfortunately, this trick only works if you bought the game through Bethesda Launcher. However, if you are able to locate the exe through your own volition and make it work, that is just as good.

The discovery was made by DanteMenethil on ResetEra forums.

All you have to do is navigate to the install directory of your game and look for a folder called “original” in it, is an exe file that allows you to run the version of the game without Denuvo DRM. 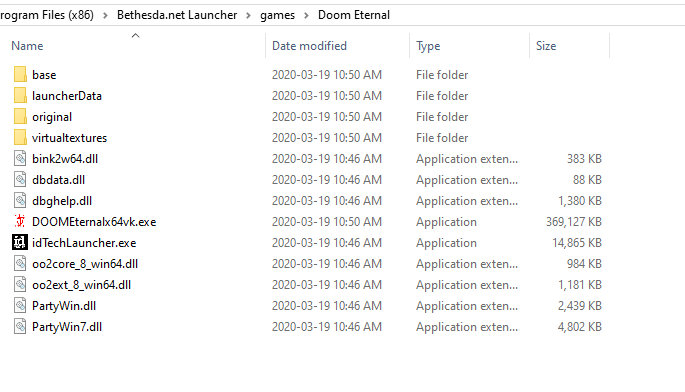 Dante suggests that for the duration this is unnoticed, to back up the game and not update the game until you are satisfied with the game.

Doom Eternal is the latest release from ID Software’s highly acclaimed sequel to the 2016 soft reboot of the series, but it seems that they even beat pirates to the punch of getting their own games cracked.

While this is still a far cry from getting the game pirated, people who do own the Bethesda Launcher version of the game are in for one heck of a surprise when they are able to play the game without Denuvo DRM draining their performance.

Keep in mind, that this can be patched at any moment. It is best to make the most of this occasion. With the whole self-quarantine situation as it is, now is the time to binge on Doom Eternal to your heart’s content!

This has been a repeated slip up by ID or Bethesda games, but for now, it is a pleasant slip-up, to say the least. Don’t expect the patch to be deployed any time soon as all major developers and publishers are mostly working from home and will likely release a patch or fix very late, however, it’s best to not take your chances.