Darkest Dungeon Switch and Xbox One Rated by PEGI

Darkest Dungeon lives up to its name as it is a merciless and relentless dungeon crawling RPG, while the game has met with great acclaim on the PC, iOS, and PS4, it seems that the dungeons are looking to inhabt the Switch and the XBox as we see Darkest Dungeon Switch and Xbox One Rated by PEGI (Pan European Game Information), the rating board for Eurpoean games.

According to Red Hook studios, the developers of the game, they did say that the potential release date could be mid-Jan.

We put some details in that blog post. TL;DR Hopefully will be mid Jan.

What adds to the mystery is how Darkest Dungeon has been rated for not only the Nintendo Switch, but also the PlayStation Vita and the Xbox One. It seems that the developers are looking to leave no platform left unturned with their approach of making the game as accessible as possible. 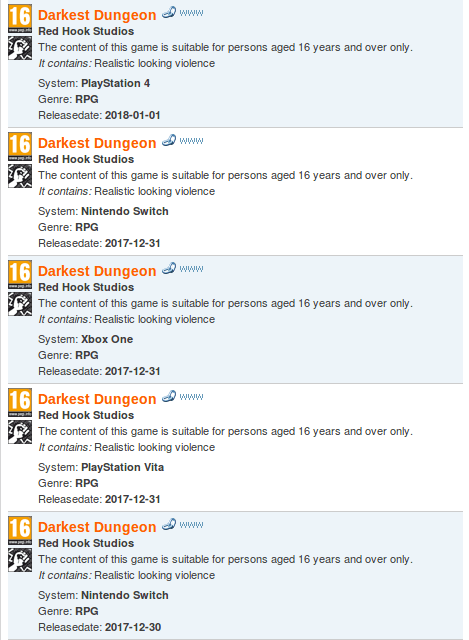 What is also curious is how the game has a physical store listing for the Crimson Edition on Amazon Germany.

In a similar fashion, it is only recently that Overcooked: Special Edition for the Nintendo Switch is getting a physical release on Amazon despite being on the eShop for many months now, but it is routine for developers to deliver an all-in-one edition of their game when they release on a platform months after release.

For now, this is all just proof that there are more platforms than meet the eye for the exciting dungeon crawler that we are sure PC and PS4 players alike have thoroughly enjoyed, and we hope that the release for the Xbox One, Nintendo Switch and the PlayStation Vita version stays on track.

Are you a fan of the game? Will you be buying it again on a new platform? Let us know in the comments section below.