The great journey comes to PC

After its initial announcement, Octopath Traveler is making its way to the PC. Square Enix has just shared the Octopath Traveler Pre-Order Bonus for Steam, and if you have been waiting to grab the game, now would the time to grab it. Even if the pre-order bonus is on the … dull side.

Octopath Travel is a game that made a huge splash on the Nintendo Switch. The game was announced for the PC version earlier this year and it seems that PC fans are eager to grab the game on Steam.

However, it is disappointing to note that a pre-order bonus for the game is just a set of wallpapers. 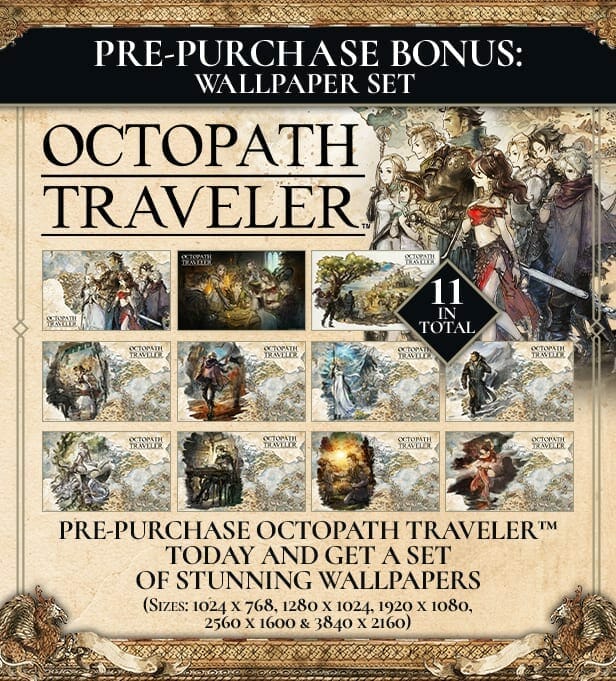 So yes, if you thought about getting an exciting piece of armor or weapon as a pre-order bonus, I am sorry to disappoint.

You can view the full details here. The game will be available to Steam on June 7th, 2019. It is understandable that the PC community has some strong animosity against the Epic Games Store at the moment, so keep in mind that the game coming to Steam will definitely make PC fans overjoyed.

Octopath Traveler met with a lot of success on the Nintendo Switch, getting some great sales and critical acclaim for bringing back a classic style of original RPG look and feel, akin to the Final Fantasy games (Final Fantasy V and before). However, fans of the game are also a bit on the fence for the game, as they say $60 for a port might be a bit much.

This is further compounded by the lackluster of pre-order bonuses, where normally companies offer a free game, or items to encourage players, but a set of wallpapers is not something one would expect.

We can hope that the shaky community post doesn’t ruin this otherwise incredible game on the PC. Keep in mind that the Summer Sales are also approaching, so you might want to hold on to your wallets if you plan on grabbing this.

What are your thoughts on the game and the pre-order bonus with it? Let us know in the comments section below!