PatternUnlock from Jonas Gessner enables you to bring the Android lock screen to your iPhone. The developer has already released a number of jailbreak tweaks that have hit the Cydia i.e. Protube, Protube HD, Unfold and a number of additional widgets. 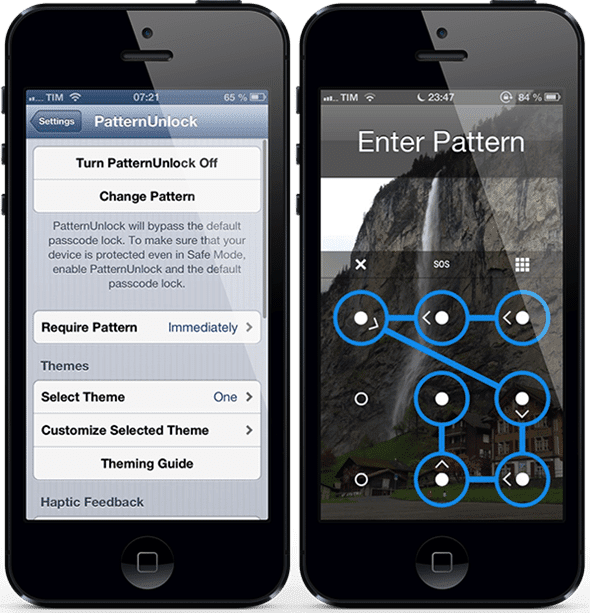 The tweak allows you to replace the default passcode lock screen of iPhone. The tweak displays the Android pattern lock screen to unlock the device. Either you can use default set patterns or can create a new pattern through the Settings section. You can also set the vibrations ON or OFF.

The new JAILBREAK tweak comes with five beautiful themes. These themes support the display of iPhone.  Previously we have seen that AndroidLockXT, a tweak with the same above mentioned features, does not fit perfectly on the iOS.

PatternUnlock also adds a SWAP button on the upper right hand corner of the display to quickly shift your screen to default passcode screen. So in order to disable the tweak, you don’t even need to uninstall the tweak. The tweak uses AES-256 bit encryption to record the pattern for the security purpose. The tweak enables you to add an emergency call button on the lock screen.

So if you want to get rid of the default lock screen of iPhone, PattternUnlock should be your choice. As to offers a new way to passcode protect your device, replacing the standard passcode lock with an easy, secure, stylish and fun way to unlock your device with a pattern.  Moreover, it is stable and easy to use.

You can find the tweak for only $1.99 from the BigBoss repository. However your device should be JailBroken having iOS 6.0 or later.