The Samsung Galaxy S9 and S9+ have been announced a couple of days ago. And, ever since then, they have been pretty successful at staying in the news. The most recent one being that the Samsung Galaxy S9+ earns best-ever DxOMark Camera Ratings! Samsung promised us all a “reimagined” camera experience, and apparently, they have delivered exactly that.

The Samsung Galaxy S9+ has set a whole new record. Its camera rated 99 points, which put it in first place, surpassing iPhone X and the Google Pixel 2! DxOMark reported that:”The S9 Plus comes with a camera that hasn’t got any obvious weaknesses and performs very well across all photo and video test categories,” the DxOMark review says. “The Photo score of 104 points is the best we’ve seen so far.” Along with the amazing Photo score, the Galaxy S9+ also scored an outstanding 91 points on the Video score! 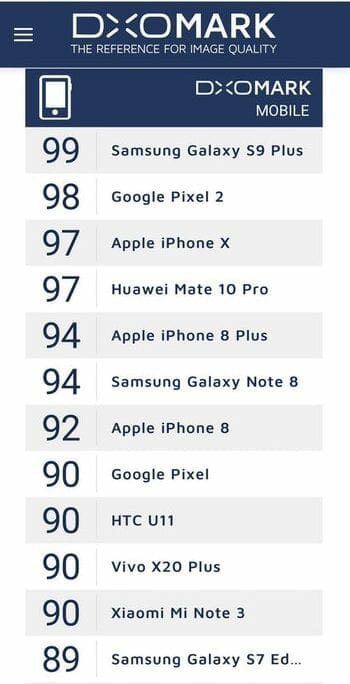 From DxOMark’s camera tests, we can easily spot a noticeable difference in the performance of the Samsung Galaxy S9+ and iPhone X. The Galaxy S9+ is clearly a lot better at capturing vivid colors and details. Meanwhile, the iPhone X performs well too but its pictures are comparatively duller and less colorful!

Samsung Galaxy S9+ and iPhone X’s results in the outdoors:

The Galaxy S9+ is the first ever Samsung phone to have a dual camera. Hence, its significantly good at low light, bookeh and zoom shots. There is one aspects where the Galaxy S9+’s camera lacks; texture. The DxOMark tests reveal that finer textures are “noticeably smeared” due to the noise reduction rendering.

You must be wondering why DxOMark’s rating is considered a big deal. Well, according to them, the tests are very detailed. To test one smartphone camera, its engineers its take and evaluate more than 1,500 test images, along with more than two hours of video. These images and videos are captured in lab environments, as well as, in natural indoor and outdoor ones.

Feel free to tell us what you think about the Samsung Galaxy S9’s score in the DxOMark’s rating!