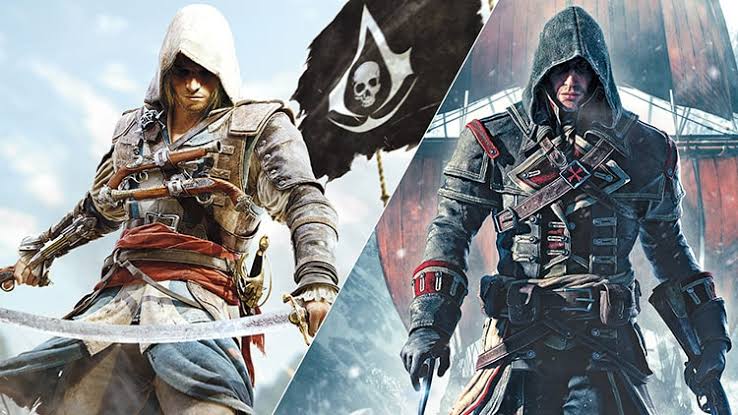 Digital Copy of the game generously provided by the publisher.

Ubisoft has a lot of love to give to the Nintendo Switch. With the release of Assassins Creed 3: Remastered on the system earlier this year. Assassins Creed 3 may not be as revered as Altair or Ezio, but it was still a first for gamers who wanted to revisit or play the games for the first time. Here’s our Assassins Creed: The Rebel Collection Review.

With all this out of the way, let’s take a walk down this pier with these 2 games on the Nintendo Switch.

If you haven’t played either of these two titles before, you’re in for a treat because Assassin’s Cree IV Black Flag isn’t only my personal favorite entry in the mainline franchise, but it also has the most compelling narrative as well.

You play as Edward James Kenway, privateer-turned-pirate who eventually joins up with the Assassin’s Brotherhood, and has an important lineage value when it comes to the overarching plot of the franchise.

He isn’t the least bit interested in the order and wants to become the most successful pirate to have lived, and it’s because of this that he stands out among the other range of protagonists in the franchise.

He’s righteous but has his own agenda, and loyalties.

The story is well written and doesn’t have any sort of padding. The characters you meet along the way are integral and are developed as you go through the oceans, and live your life as a pirate first, and an Assassin second.

We won’t spoil how you get dragged into the whole Assassin’s vs Templar business, but you’re in for plenty of surprises, and twists.

Not only does this collection include the main title, but all it’s DLCs too, that are set in the same era, featuring returning and brand new characters in their own narrative arcs.

We’re not going to spoil anything for you but playing the game as a Templar, is surely something that we weren’t used to when this first came out.

These screenshots were taken during our Assassins Creed: The Rebel Collection Review.

While I don’t have my PS3, or Xbox 360 to compare these games to, I can say that there are points where the games match the quality, but at times do surpass the visual quality of their previous generation originals. This is to be expected when you’re porting such massive open-world games on a system like the Switch.

Whether you choose to play the game in handheld, tabletop or docked is up to you. However, if you’re going to plug it in expecting the visual appeal of Doom or Breath of the Wild, you’re going to be very disappointed. This is not to say the game doesn’t hold up to modern standards, but it does have a strong and unique presentation if you don’t immediately compare it to games that succeeded it or current games in the console generation, this is still a previous generation title, improved today.

If you’re willing to treat the game as a last-gen title and go in with an open mind with regard to the graphics, you’re bound to have more fun with it.

Keep in mind, the games (particularly Black Flag with various DLC’s) gives you a plethora of different places to visit with majestic and beautiful places like Kingston, Havana, Nassau, and nearly 50 islands to explore, this game is tapped full of gameplay and lots of fun for people eager to explore the series for the first time.

The game does a good job of keeping up a steady FPS. Even with a lot of chaos on the screen, whether it was in naval combat or sword fights, the game did a good job of staying at a stable frame which surprised me. Freedom Cry’s opening Naval Combat was full of explosions but it was still a relatively smooth experience. In my brief sessions with the games, I tried my best to bring the FPS down in handheld as that’s when the system is at its bare, even in handheld the FPS didn’t falter.

Where the graphics might not be the strongest aspect of the game, the game makes up for it plentiful with a lot of exclusive features for the system, a stable frame rate and plenty of content to keep you coming back for more.

The games offer a convenient touch screen interface so that you can have a second option to adjust your game when playing on a tabletop or handheld. The game further added motion controls when navigating ships, horses, etc. and HD rumble. There have been tweaks for the HUD, subtitles, eagle vision and other aspects of the game to fit the system and make experiencing the game all the more memorable on the system.

This is where you face a binary decision:

Whatever you decide, Assassins Creed: Rebel Collection is a game that fans of the series will enjoy. Grab it when you can at your own leisure, but I recommend newcomers to the series explore the game immediately.

Both games offer immense value with plenty of DLC to boot, plenty of post-game content with lots of exploration and some amazing stories to be told.

You can purchase the title digitally at the official Nintendo Store from this link.

What did you think about our Assassins Creed: The Rebel Collection Review? Let us know in the comments below and share your thoughts.